Beer potomania is an electrolyte imbalance condition that occurs to people who consume large amounts of alcohol. Although it is unusual, it can lead to complications if this is not managed properly [1, 2, 3].

This was first observed in 1971 when heavy beer drinkers present with hyponatremia or low serum sodium level and encephalopathy. When a large consumption of beer is combined with a minimal intake of normal food, it may possibly lead to the condition [1, 2, 3].

Beer contains a minimal amount of solutes but has high levels of carbohydrates. Drinking a large amount of beer is similar to polydipsia and it exceeds the ability of the kidneys to dilute the urine. If the ingestion of a high amount of free water is not matched with the consumption of enough food or solutes, it will have a combined effect that leads to hyponatremia [1].

It is thought that the kidney is able to excrete a large amount of diluted urine if there is a normal kidney function and a suppression in the secretion of antidiuretic urine. A human is able to excrete about 20 liters of undiluted urine. The same individual should consume sodium that is proportional to the amount of excreted urine to maintain the normal serum sodium level [1]. 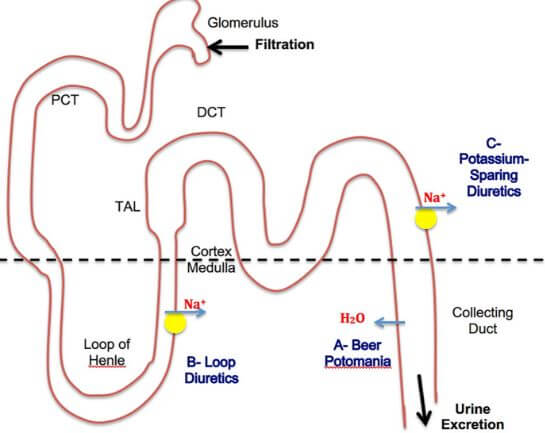 There are 3 factors that are known to contribute to the development of beer potomania. First is that beer is mostly free water with a very small amount of salt and protein. There is only about 30 mg of sodium in 1 liter of beer.

Although this condition is mainly associated with drinking a large amount of beer, the present of an underlying medical condition may increase the likelihood of developing the condition.

Individuals with congestive heart failure, liver cirrhosis, hypovolemia, and syndrome of inappropriate antidiuretic hormone (SIADH) have a higher probability of developing this condition when they drink a large amount of beer [2].

The main symptom of this condition is hyponatremia with an average serum sodium level of about 108 mEq/L. The normal sodium level in the system is between 135- 145 mEq/L. Other abnormal laboratory findings which may be found in these patients are hypokalemia or low serum potassium level, low blood urea nitrogen level and low urine sodium level. Physical symptoms that may be seen in these patients include alteration in mental status, gait disturbances and weakness [1, 2, 3, 4, 5, 6].

The focus of the treatment for beer potomania is to bring the serum sodium level back to the normal level. Extreme caution must be observed in correcting the electrolyte level because of the possibility of edema or central pontine myelinolysis which may occur if the correction is performed rapidly.

Patients will be administered saline fluids and their serum sodium level and urine output will be continuously monitored. Other treatment that will be given to the patient will depend on the signs and symptoms that have manifested [1, 2, 3, 4, 5, 6].

Beer potomania can be prevented by avoiding the consumption of large amounts of beer. Eating while drinking beer may provide the necessary solutes that the body needs to maintain the normal serum sodium level. Any symptoms that are felt after drinking beer must be consulted immediately to the physician to be addressed immediately and avoid the development of complications [1, 2, 3, 4, 5, 6].