What is Greenstick Fracture?

Greenstick fracture is a mild bone fracture commonly seen in young children. This kind of fracture is characterized by a bend or partial break of the bone. The bone fracture occurs the same way you would bend a green branch of tree. 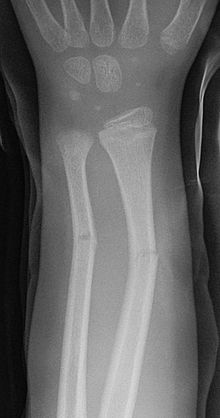 When you take a young twig and try to bent or break it, you realize that part of it will break while the other side will remain stressed out but it won’t break. This is the analogy behind Greenstick facture. 1

A majority of greenstick fractures are seen in children who are less than 10 years old. This form of bone fracture is found in children because they tend to have softer, more flexible bones than those of adults that are brittle. 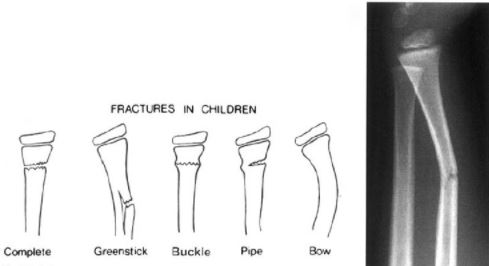 It is a transverse fracture involving the cortex and it extends to reach the midportion of a bone. It is oriented along the bone’s longitudinal axis and does not disrupt the opposite cortex, or it causes minimal disruption to the opposite cortex.

It is another form of pediatric incomplete fracture. It is caused by impaction. This fracture occurs due to a force that acts on the bone’s longitudinal axis. Typically, torus or buckling fractures are as a result of a fall that acts on an outstretched arm. These fractures are associated with the distal radial metaphysic.

It is the third form of incomplete fractures and it involves curving of the bone along its longitudinal axis. 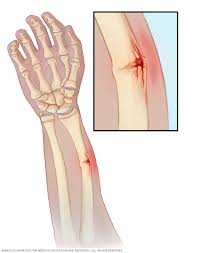 The signs and symptoms of greenstick fracture depend on the severity. Sometimes, mild fractures could be mistaken for something else like a bruise or sprain while severe form of the fractures may result in deformity and significant amount of pain and swelling.

Certain features of greenstick fracture tend to be similar to the ones you find with standard long bone fractures. These features are such as:

The fracture is commonly caused by a forceful impact on the body. The bend and partial breaking of the bone may be due to:

Children participating in sports and indulging in play activities are more likely to suffer falls that could cause greenstick fractures. The fracture mostly occurs on arm bones because it is natural for children and even older people to extend their arm to support their body when they are falling.

Parents and even doctors may find it difficult to detect and diagnose this kind of fracture because it does not manifest in the same way as the standard bone fractures.

Also the symptoms tend not to be exactly as those of other bone fractures. Again, it is difficult to distinguish this fracture from other conditions like a soft-tissue injury for example, a sprain or bad bruise.

A doctor will use diagnosis tests such as CT scans and X-rays to detect the problem.

X-ray images of the uninjured limb may be required so that they are used to compared with the images for the injured limb. The reason why comparison may be helpful is because, it could reveal bone abnormalities that are not necessarily related to the fracture, and which could otherwise have remained undetected.

It is important to mention that at times, greenstick fractures occurring in soft bones of children might not show up clearly in X-rays. A doctor may therefore, order for a more reliable test such as computerized tomography (CT) scan. Also, ultrasound may provide better images.

In treating greenstick fractures, doctors will try to subjugate the fracture by mildly pulling the affected bone apart (just a little bit, and gently) and then push it into position. This helps straighten it to look as it was before the fracture.

A doctor will put a cast on the affected limb and immobilize it so that there is no movement that could cause further harm on the limb. The cast will help the bone to start growing back and ensure that complete healing of the fracture is achieved.

Casts are considered the standard treatment methods for restricting the motility of bone. Buckle fractures are treated using casts that may be placed below or after the elbow, in case of a fracture occurring on upper limbs.

Doctors, at times may recommend the use of a removable splint in case they feel it can offer the same treatment benefits. A removable splint is an ideal option to a child because it can be taken off when the child is showering or bathing. Fractures involving the distal radius in children respond well to treatment when the splints are used.

While most greenstick and torus fractures will heal after they have been subjugated and a cast placed, in the event that healing does not occur properly, a surgery may be an option.

To help in pain relief, a doctor may prescribe pain management drugs to the child.

When a child has been put a cast, boot, or splint on the limb, you may want to ensure the following home care tips and advice are followed during the healing process: