What is Hamstring Tendonitis?

Hamstring Tendonitis is a condition in which the hamstring muscles, comprised of three posterior leg muscles are inflamed due to a variety of conditions. This inflammation is responsible for the release of various vasoactive substances that affect the muscle and cause the signs and symptoms of hamstring tendonitis.

The muscles are responsible for daily activities of living such as walking, running and jumping. With no proper warm up or constant usage of the muscles without rest, the hamstring muscles are prone to damage and will affect the quality of life of the sufferer.

To understand hamstring tendonitis, we need to take a look at the muscles involved in moving the body forward during locomotion. These muscles are the antagonists (oppose another muscles action) to the quadriceps muscles which are responsible for stabilizing the hamstring muscles propulsive action. 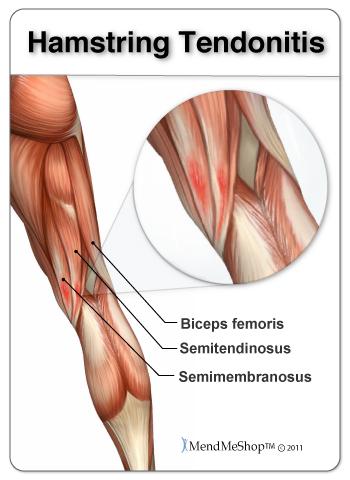 But compared to the quadriceps muscle which is composed of four muscles and tendons, the hamstring muscles are only made of three tendons and such require more strength and power to make body movements fluid and effortless.

In concert, the muscles tendons are more susceptible to wear and tear as they are more used than the quadriceps simply because a majority of human motion is forward. If one must come to an analogy, one would think the quadriceps as brakes of a car and the hamstring muscles as the engine.

The more the engine is used, the more likely it’s going to breakdown. Muscles are tough and can take a lot of punishment, but repeated movements and constant stress on these muscles will eventually result into breaking down the muscle tendon fibers far faster than they can hypertrophy (grow bigger). This imbalance of breakdown and growth results into inflammation that causes pain whenever the muscles are used in locomotion. 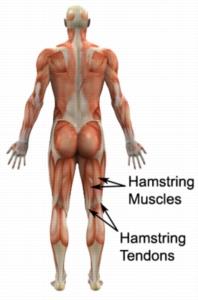 The signs and symptoms are relatively straightforward. There is sore, numbing pain that starts at the sides at the back of the knee where the hamstring tendons are located. The pain may radiate to the calf or to the thigh. In some cases, the sufferer may experience stiffness of the knee joint that resolves with rest.

As the inflammation continues and the affected tendons are not given enough rest, the inflammation travels along the length of the tendon and muscle that eventually manifests as impairments in physical activity. Tenderness may be detected in the affected area upon palpation by the healthcare professional. Attempting to accelerate when running may result in the affected limb’s feeling of weakness and numbness.

Diagnosis of hamstring tendonitis requires a thorough history of progressive weakness and pain that is felt at the back of the knee coupled with a history of extreme usage of the knee in sports or in athletic activities.

The most common story is that the sufferer undertakes extreme exertional effort in sports that causes them to experience soreness in the knee for long periods of time unrelieved by rest or ice compresses. Sometimes, radiologic examination in the form of CT scans or MRI is used to assess the severity of the hamstring tendonitis. Seek medical attention if you feel like you are experiencing these signs and symptoms.

Once the diagnosis is confirmed, treatment of the affected tendon may begin. An easy stop gap method to treat hamstring tendonitis is the RICE method. This stands for Rest, Ice Compress and Elevation of the affected leg.

Non-steroidal, anti-inflammatory medications can be administered to help subside the inflammation and relieve the pain that comes with it. The patient’s leg can also be immobilized for the rest of the therapeutic regimen to reduce irritation and improve the healing process of the hamstring tendons.

Physiotherapy can also be used to slowly acclimatize the affected leg to tolerate increased loads and increase pain thresholds. Physiotherapy sessions play a great role in maintaining the functional capacity of the patient to perform the usual exercises and daily activities of living.

In case where the tendonitis is refractive and no other therapies are effective in reducing the swelling, scheduled doses of steroids can be injected into the area to reduce the inflammation. Patients usually report a high rate of satisfaction after these injections because the steroids directly target the mechanism that inhibits the inflammatory process. These periodic injections can be given as needed until the inflammation subsides.

Most sufferers of hamstring tendonitis recover spontaneously after closely-monitored medical therapy. After the inflammation subsides the leg will still need time to grow strong after the initial insult.

It is highly recommended that patients do anything they can to stop irritating the tendons as continued insult will only result into delaying the healing process. The pain can be effectively managed with a battery of pain medications but care must be taken not to overdose.

Hamstring tendonitis is a common injury that happens to most athletes and runners who face constant use of their hamstring muscles and tendons. This inflammation is characterized by pain, stiffness and weakness of the affected limb and can be remedied if given enough rest and ice compress. For more serious cases, medical therapy may be indicated but the condition is usually self-limiting and can resolve within months. Care must be taken to ensure that the affected tendons are given enough time to heal.