Macrocytosis is the term used to describe a situation where the red blood cells are observed to be larger than normal in routine blood tests. Red blood cells also called erythrocytes are solid components of the blood whose function is to take oxygen from the lungs to the body tissues and organs.

Studies indicate that patients who suffer from macrocytosis have other conditions that are primarily the cause. For this reason, when doctors see cells that are larger than normal during routine examinations and rests, they may order more tests to determine the underlying disease or condition that led to the enlargement of the red blood cells. The examination also consists of several anemia diagnoses.

When macrocytosis results from another condition, it is termed as concomitant macrocytosis. Other common concomitant diseases include cardiomegaly, which is the enlargement of the heart.

Macrocytosis is one of the indications that a patient may be having an alcohol disorder. Alcoholism is when your drinking is harmful or causes distress and unfortunately, it is prevalent in America with 18 million adults recorded to have an alcohol disorder. When red blood cells enlarge as a result of excessive consumption of alcohol, then this is macrocytosis caused by alcohol.

Other concomitant conditions for alcoholism are hypertension and high levels of the enzyme delta glutamic transferase in the liver. Furthermore, alcoholism is the only condition associated with macrocytosis that is indiscriminate of the patient’s age considering most cases of macrocytosis are in older patients.

Most incidences of anemia are accompanied by macrocytosis. Megaloblastic anemia caused by problems in the production or synthesis of the nucleic acid; DNA is a type of anemia that is known to affect the division of the red blood cells. Although the acid DNA is affected, RNA is not and, therefore with the cell is dividing slowly, there are increased cytoplasmic components resulting in larger than normal cells.

It is actually the most common cause of macrocytosis and is a concomitant condition for the other causes. For example, patients with alcoholism have trouble absorbing vitamin B12 and the deficiency is also the primary cause of megaloblastic anemia.

The vitamin and other folate coenzymes are important in the synthesis of DNA necessary in rapidly dividing cells such as the red blood cells.

Vitamin B12 is majorly given by meat and products of meat like milk, therefore those who practice a vegetarian lifestyle are more likely to have this condition. Old age is also known to have problems associated with normal metabolic functions and absorption of vitamin B12 is one such process that is affected.

Diseases of the liver

Hepatic disease and disruptive jaundice are liver diseases that result in macrocytosis because of cholesterol and other phospholipids that get deposited on the walls of the red blood cells. The liver is important in ridding the body toxins but when it is affected, this function is impeded. Old red blood cells are some of those toxins processed by the liver and in the case of jaundice; this function is impaired building up bilirubin in the body.

It is also the organ that makes cholesterol (a vital fat when regulated) within the body. On the other hand, in cases where a patient’s spleen has been removed, its function to remove the lipids on the membranes of red blood cells is hindered resulting in the cell being larger than normal.

This is a condition where the thyroid gland works below the optimal function required for a healthy individual. The thyroid is an endocrine gland, therefore, it makes hormones. Thyroid hormones control the rate of metabolic activities such as breaking down fats.

When the thyroid gland does not make enough hormones to meet the needs of your body, fats may accumulate. As mentioned, when fats are deposited on the membranes of the red blood cells then macrocytosis is observed. Hypothyroidism is common in women especially those of 60 years and above.

Other conditions that bring about increased surface area of cell membranes or accelerated production of the red blood cells are such as:

Chronic Obstructive Pulmonary Disease results in the retention of carbon dioxide in the cells. Excess cell water accumulates in such cells and in red blood cells macrocytosis develops.

Some chemotherapeutic substances affect the synthesis of DNA. Which affects the division of cells as discussed. Others are those used in sickle cell anemia patients to decrease pain crises associated with their condition. Also, treatment drugs for HIV patients have reverse transcriptase inhibitors such as stavudine. This enzyme manufactures DNA from RNA and is commonly observed in patients suffering from retroviral conditions. The drugs target to prevent this harmful process in the replication of chromosomes, and macrocytosis may result when red blood cells division is interfered with.

It is important to note that patients with this condition may not show any symptoms. However, the following signs may be in patients observed to have enlarged red blood cells.

Other symptoms may also be seen depending on the primary cause of macrocytosis in the patient.

Diagnosis is easily done by routine blood tests but in some cases, taking samples of the bone marrow to further diagnose the primary concern is needed. 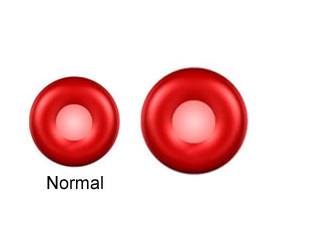 When caused by vitamin B12 or folate deficiencies require changing the diet or taking dietary supplements or injections.

For example, for vegetarians where diet change is a limited option, they require starting on injections aimed to supplement and increase B-12 absorption. With folate, certain foods are rich sources and patients would benefit from consuming them more. Such include broccoli.

In cases where anemia is associated, blood transfusions should help reduce the severity of the condition as other treatments like medications are complimented.

Macrocytosis associated with alcoholism is reversed within a short period after the alcohol disorder is treated.

Other not so common incidents like COPD and hypothyroidism are well managed by known treatments adopted by concerned specialists. As for those cases resulting from medication, the patient should be directed to either seeking suitable alternatives or managing the effects (especially for HIV patients where the disadvantages of not using outweigh the advantages).