Polyarthralgia should also be distinguished from polymyalgia, whereby the latter involves pain and weakness of several muscle groups around the body. Polyarthralgia does not affect the muscles at all, only the joints, although polymyalgia often leads to the development of polyarthralgia. 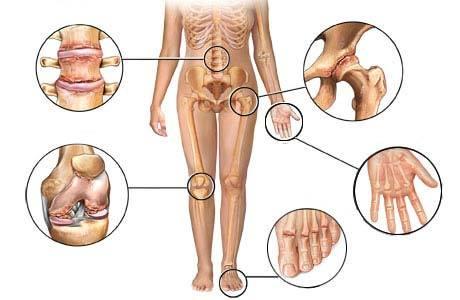 Many people think of arthritis as a single medical condition, but it actually covers more than 100 types of joint diseases and polyarthralgia is just one type of arthritis. Polyarthralgia is a type of inflammatory arthritis which is caused by damage to the joints due to their wear and tear, which could be due to overuse with age or traumatic injury. When either of these happens, the cartilage within the joint becomes damaged. Cartilage is the type of tissue that is found at the end of a bone, which allows two bones to glide over each other smoothly. [2]

Normally, cartilage is lost regularly through physical activity, but the body generates more to replace the lost cartilage. Even with age, as this replacement system becomes slower, the immune system is still active, and it works on the joints by releasing white blood cells which trigger an inflammation to prevent any disease or infection within the joints, and this keeps the individual healthy.

With polyarthralgia, though, this process doesn’t happen as it should, and instead of reducing the release of white blood cells to relieve the inflammation, the body keeps on doing it. This is an autoimmune response which causes the body to attack itself and cause more harm than good.

The inflammation becomes larger and larger, exerting pressure on the bursa and finally leading to a swelling on the synovial membrane. The damage to the cartilage and swelling of the joint will not only cause a joint inflammation but will also decrease joint mobility. This causes pain whenever there is joint movement. With most forms of arthritis, this autoimmune response is observed in one or two joints, usually opposite joints, but polyarthralgia causes this effect in numerous joints of the body leading to serious pains.

Age is usually the main cause of polyarthralgia because, as mentioned earlier, cartilage gets weaker with age due to diminished regeneration. Other common causes include lack of physical activity and obesity, the former causing the cartilage to weaken as a result of lower use and the former due to overuse. With increasing weight comes increasing pressure on the joints which enable movement and this can speed up the degeneration of cartilage. Then there are some causes which trigger the condition, such as trauma due to, say, an accident or injury directly to the joint, or cigarette smoking which leads to poor vascular function. Finally, some people are genetically prone to polyarthralgia. In these cases, the signs and symptoms of polyarthralgia start at an early age. [3]

Signs and Symptoms of Polyarthralgia

The signs and symptoms of polyarthralgia resemble those of other common forms of arthritis, only in a larger scale and involving many more joints. These symptoms include: 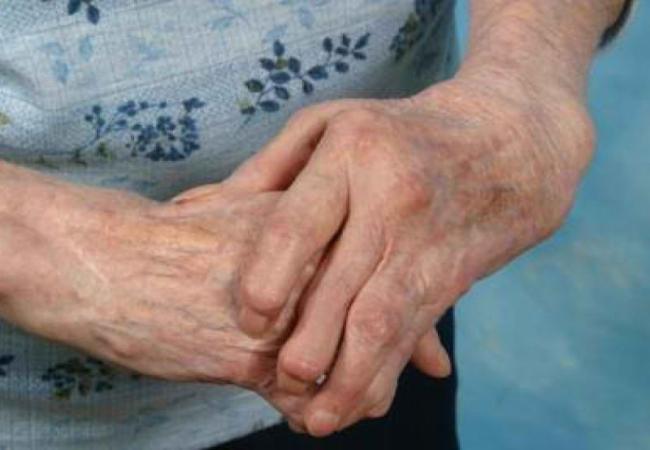 Joint Deformations due to Polyarthralgia

These symptoms become most evident starting in the middle ages, around 30, until old age, in the 50s. Also because polyarthralgia affects many joints, the symptoms can be experienced in the knees, hip, hands, legs, shoulders and the upper limb. [4]

The diagnosis of polyarthralgia can be a lengthy process involving numerous tests to differentiate the diagnosis from any other type of arthritis. The first step, though, is to analyze the patient’s medical history, checking for any previous injuries and their family history for any signs of arthritis. Then, the doctor examines the affected joint using imaging technologies like X-rays, MRI scans, and radiography. These tests are used to show the doctor the extent of joint damage, how far the inflammation has spread and which areas of the joint have been affected. 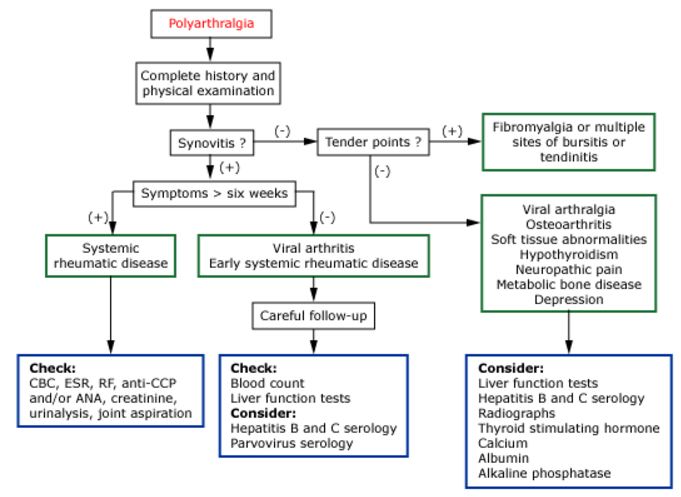 In order to formulate a treatment plan, it is also important that the doctors determine if the problem is autoimmune, like rheumatoid arthritis, or just caused by wear and tear, like osteoarthritis. This is done through a blood test that checks for a blood count to rule out anemia, plasma viscosity for any markers of inflammation and rheumatoid factors. [5]

Unfortunately, there is no cure for polyarthralgia, just like other forms of arthritis, but medication will be provided to aid in the management of the condition. The most important category of medication is the non-steroidal anti-inflammatory drugs (NSAIDs) which help to relieve the inflammation and hopefully reduce pressure on the nerves to end the pain as well. However, these aren’t always enough, and sometimes the patient may be in too much pain to function, so analgesics are provided, which are basically painkillers and could also be NSAIDs or narcotic analgesics. [6]

All the above medications take a time to become effective, so if the patient is in immediate chronic pain, some non-invasive medical procedures can be performed such as the draining of fluid from the joint using a needle. Sometimes, if the joint is too damaged due to infection, invasive surgery may also be performed to remove the entire bursa.

Even with proper medication, it is not possible to completely cure polyarthralgia, which is why the patient is often enrolled into palliative treatment programs to help reduce the symptoms and strengthen the joints. Primarily, this involves physical therapy, which aims to relieve pain through the release of endorphins and also strengthen the joints to prevent further damage. Being overweight has also been shown to lead to polyarthralgia, and physical therapy can help you reduce weight and take off some weight from your joints, thus reducing symptoms.

The next step involves lifestyle changes, which means avoiding destructive habits which contribute to polyarthralgia like smoking and adapt new habits like a proper diet to provide your body with essential nutrients like calcium and vitamin C and D which help to prevent further inflammation and promote bone development. [7]