Imagine that your well-formed, cylindrical stools are streaked with whitish spots, sometimes they may be pale all throughout on top of being foul-smelling. They float at the top of the toilet water and oil droplets can be seen on the water which can be hard to flush down.

Steatorrhea is a medical condition in which your feces have fatty deposits in them. For reasons of anti-gross pictures that may cause discomfort for our readers we will not be showing pictures of feces. Instead we will take a more descriptive approach.

Normal feces are brown in color because the bilirubin pigment which is yellow in color is acted upon by intestinal bacteria that causes the feces to acquire a brownish-yellow color. With conditions that impair the absorption of fats into the intestinal blood vessels, the fat lobules are left inside the intestinal lumen and are excreted along with the feces, giving the stools the distinctive, pale, bulky appearance. 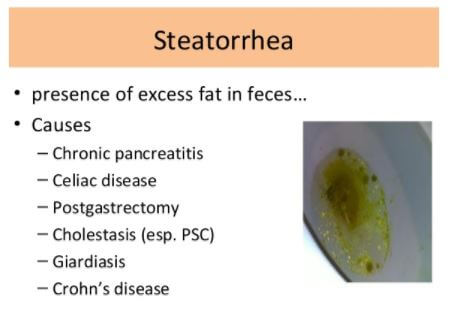 How does fat digestion normally happen?

We must first begin our discussion with the gastrointestinal tract. A good understanding of this organ system will allow a good tracing of how the structures and the chemical reactions play a role in its development. 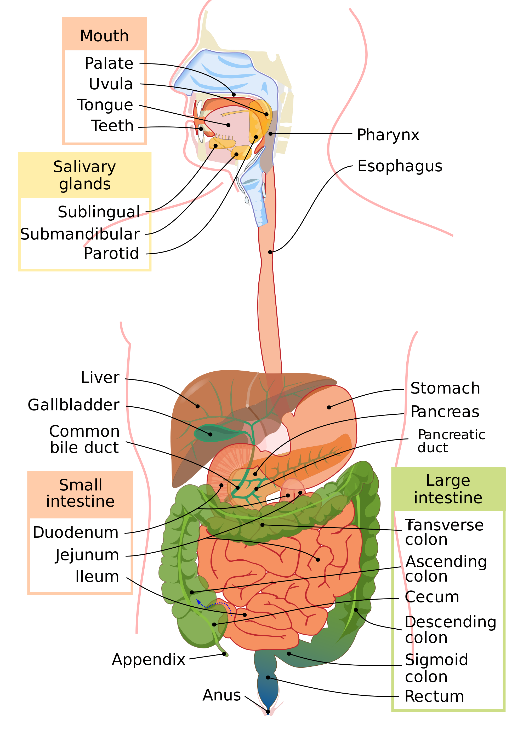 When we eat, three different sources of energy in the form of carbohydrates, proteins and fats are broken down to simpler molecules that can diffuse into the blood stream and be used for raw materials in building and maintaining the human body.

Different processes occur, from the time the food enters the mouth down to moment it exits the anus. But for this discussion, we will focus on the digestion and absorption of fats or lipids. When fatty food is ingested, it is first acted upon by salivary or lingual lipase.

This enzyme breaks down fat into smaller molecules known as fatty acids. There are more enzymes that will act upon the molecules as they go further down the gastrointestinal tract into the intestines where the bulk of digestion and absorption happens. Another part of the breakdown process is when the fatty acid enters the stomach.

Cholecystokinin, a hormone, is released and the gallbladder starts contracting, releasing bile salts which bind with the fatty acids acting as a surfactant that turns them into tiny micelles which then diffuse through the intestinal epithelial cells and then into the bloodstream.

Now that we know what happens normally in fat digestion, we can now discuss the different areas which fat digestion and absorption is impaired. The usual culprit is impaired nutrient hydrolysis because of pancreatic insufficiency.

This is best found in cases such as pancreatitis, pancreatic cancer and cystic fibrosis. When the pancreas is incapable of producing the normal enzymes required for proper digestion the fatty acids remain in the lumen. This also happens in cystic fibrosis where the secretion of enzymes is impaired because of the increased viscosity found in the fluids.

Other causes of include an impaired or cirrhotic liver which is unable to provide the bile salts earlier described to emulsify the fats and act as mediators in the absorption process. Once again the fatty acids are unable to be transported across the intestinal epithelial cells and are left in the lumen.

Impaired nutrient absorption can also occur when the surface area responsible for absorbing fatty acids gets damaged such as in Chron’s Disease, Inflammatory bowel disease, chemotherapy (which damages the rapidly dividing cells of the intestine), AIDS or radiotherapy. 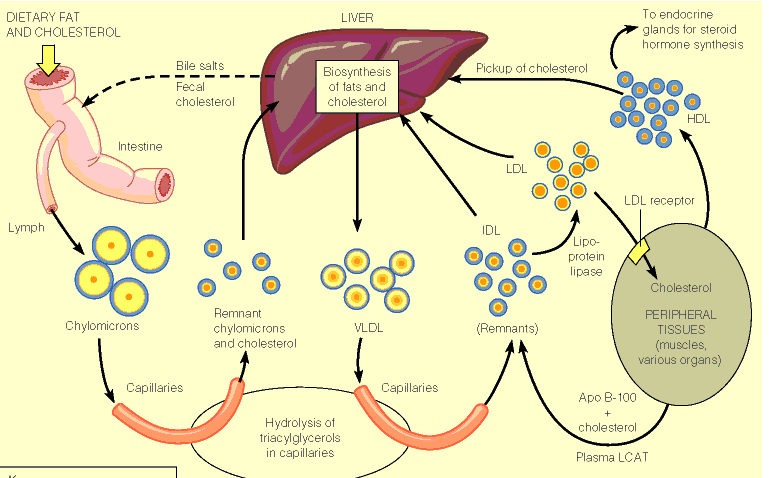 Surgical resection of the intestine to treat certain diseases may also have steatorrhea as a complication. Short bowel syndrome and intestinal resection for cancerous lesions will result into a decreased absorptive area.

The typical signs and symptoms of steatorrhea include but not limited to diarrhea as more fluid is drawn to the intestinal lumen, weight loss and fatigue because a major source of energy cannot be utilized, flatulence as the bacteria act upon the undigested food creating gases such as methane and hydrogen, as well as edema from the associated protein loss (severe enough may cause ascites or fluid in the abdomen).

As already discussed above, there are many, many causes of steatorrhea. Self-treatment is not recommended. You must get yourself to the nearest medical professional who will ask you for signs and symptoms. Establishing the diagnosis of steatorrhea and its cause is difficult. The gold standard remains a timed, quantitative stool-fat determination.

From a practical standpoint, this is quite difficult because nobody really wants to handle fecal matter. A qualitative stool test, the Sudan III staining method is available as it is not only rapid but also inexpensive. The only drawback is that it cannot establish the degree of fat malabsorption and is best used to screen.

Hence, in order to truly clinch a diagnosis of steatorrhea, the physician will be using a complement of complete blood counts, prothrombin time, serum protein determination and alkaline phosphatase that may pinpoint to a dietary nutrient depletion.

Another diagnostic modality employed would be the use of X-rays in conjunction with dyes to determine the structural integrity of the intestinal walls. Once the diagnosis is confirmed and the underlying cause identified, treatment may begin that is specific for that kind of condition.

Steatorrhea is truly a distressing sign that alarms the patient to seek medical consult, an understanding of how it comes about will increase awareness as well improve health seeking behaviors to improve the overall quality of life.

It has many areas in body processes that can be affected and the treatments differ to solve each underlying case. But with effective treatment, patients can be expected to have a return in normal bowel function.