What is Tarsal Coalition?

In order to best understand tarsal coalition, it is important to be familiar with the skeletal anatomy of the foot. The foot is made up of 28 bones. The 14 bones of the toes are called phalanges. The phalanges are jointed at the base of the toes where they connect to the five metatarsal bones.

The phalanges and metatarsal bones and two sesimoid bones make up the forefoot (the toes and ball of the foot). The midfoot (around the arch of the foot) is made up of three cuneiform bones, the cuboid bone and the navicular bone.

The talus (ankle) and calcaneus (heel) bones constitute the hindfoot. The foot also has numerous muscles, tendons and ligaments.

Tarsal coalition is a congenital condition in which a fibrous connection develops between two or more tarsal bones. Though present at birth, it is not clear if tarsal coalition is genetic (passed from parent to child) or a birth defect that occurs during fetal development.

It is most commonly found between the calcaneus and navicular bones or the talus and calcaneus bones. Most people affected by tarsal coalition have this tissue coalition on both feet. 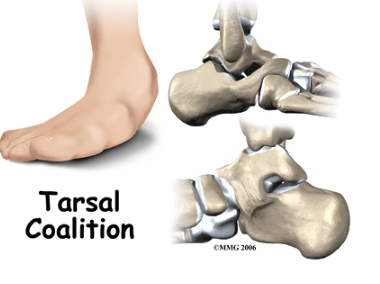 Over several years, the fibrous connection between bones develops into bony or cartilege-like tissue that does not allow normal foot flexibility.

The condition is most typically diagnosed during the teenage years, once the fibrous tissue has ossified (become hard or bony) and symptoms of pain and foot stiffness start.

Because the foot is then held in a rigid position by the abnormal connections between bones, this deformity, shoud be treated soon after diagnosis, so as to prevent or limit premature joint degeneration.

Symptoms of tarsal coalition may include:

The pain of tarsal coalition may be caused by strain on the ligaments, spasms of the muscles of the feet and the resultant shortening of foot tendons. Tiny fractures can occur where the fibrous, cartilaginous or bony tissue is connected to the bone, and will contribute to the pain.

With tarsal coalition, the structural changes of the foot can be attributed to the same mechanisms.

There is the possibility of a genetic predisposition to tarsal coalition. Suspicion for the condition would be higher in a patient with a sibling or parent with similar symptoms or diagnosed tarsal coalition.

The symptoms of tarsal coalition are not specific to the condition. Sprains, strains, fractures, nerve damage and other conditions may also present with pain and stiffness.

Tarsal coalition is diagnosed using imaging studies (x-ray, computerized tomography [CT] scan and/or magnetic resonance imaging [MRI]). While soft tissue cannot be seen on x-ray, signature changes in the formation of the foot bones can be suggestive of tarsal coalition. 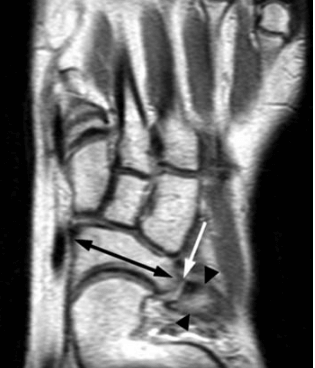 The treatment of tarsal coalition is decided upon the consideration of several factors. It is determined by assessing which bones have coalition, how extensive the coalition is, the severity of the symptoms and whether or not there are signs of degeneration of the bones and/or joints.

The person’s age and desired level of physical activity are other factors that should be considered.

Mild cases of tarsal coalition may initially be treated without surgery. Rest, wearing orthotics such as arch supports, and taking NSAIDS (non-steroidal anti-inflammatory drugs), such as ibuprofen and naproxen, may be successful in reducing the pain. These therapeutic measures may mediate the symptoms of tarsal coalition, but they will not cure it.

If pain management measures are of limited success, casting or otherwise immobilizing the foot will take stress off the foot so that healing can take place. Physical therapy and wearing supportive footwear will enhance healing and provide symptom relief.

In more severe cases of talus coalition, or when non-surgical measures have not been effective, surgery may be recommended.

If both feet are affected by tarsal coalition, surgery will typically be done on one foot at a time, allowing the first foot to heal completely before the operation is repeated on the opposite foot.

It is recommended that recovery from surgery be progressive. For the first three weeks, the affected foot is immobilized (likely casted) and weight-bearing should be avoided.

The next step in recovery is to gradually place weight on the foot and to start physical therapy with exercises to increase the foot’s range of motion, promote flexibility and strengthen the muscles of the foot and ankle. Thereafter, there can be a gradual return to full activity.

Tarsal coalition has a high rate of post-surgical recurrence. Different surgical procedures are under investigation to reduce the recurrence rate.

Early diagnosis of the condition (before the tissue becomes rigid or bony) may allow for surgical treatment before more debilitating and permanent damage can occur.