Bibasilar atelectasis is a medical condition that affects the lungs. A person with this diagnosis may have difficulty breathing. It has several causes but it can be managed to help the patient breathe more easily [1, 2, 3].

The term atelectasis refers to the condition that causes a collapse of a part or the entire lung. In a bibasilar atelectasis, the bottom portion of a lung or both lungs collapses and it could not perform its role in gas exchange. The human body has a pair of lungs located on both sides of the chest. These are air-filled organs that are used for respiration or breathing.

Inside the lungs are microscopic air sacs known as alveoli. It is in the alveoli where the exchange of oxygen and carbon dioxide occurs. Oxygen is absorbed through the alveoli into the bloodstream for distribution to the body. On the other hand, carbon dioxide is transferred from the blood to the alveoli to be exhaled [1, 2, 3, 4].

Lung collapse in a bibasilar atelectasis is caused by an obstruction in the airway. This prevents air from getting into the air sacs and participate in gas exchange. This reduces the amount of oxygen in the body and causes a problem for the patient [3]. In a majority of these cases, only a small portion is usually affected and it can heal by itself once the causative factor has been managed. In more serious cases, the entire lobe or lung is affected and it can lead to more serious complications [1, 2, 3, 4, 5].

Below are x-ray images of the human lung, figure 1 shows a normal lung while figure 2 shows the lungs in a bibasilar atelectasis. The black area in the lungs in the x-ray represents air and shows the area of the lungs that participate in gas exchange. Note that in the second image the bottom portion of both lungs had collapsed and does not contain any air. 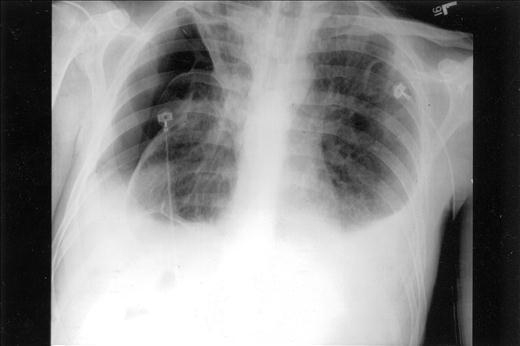 There are a variety of causes that may lead to the occurrence of bibasilar atelectasis and it can be categorized into obstructive and non-obstructive cause [1, 2, 3, 4, 5].

The presence of mucous, blood clots, environmental allergens, or foreign bodies can obstruct an airway and prevent the air from passing through. The presence of a tumor or malignancy in the lungs can also block the airways in the lungs [1, 2, 3, 4, 5].

The main non-obstructive cause of bibasilar atelectasis is the use general anesthesia in a surgical procedure. Drugs used in the induction of the patient reduces the ability of the lungs to inflate normally. This also results in accumulation of secretion even after the surgical procedure [1, 2, 5].

Trauma to the chest, such as what may occur after a fall or a vehicular accident. Chest injury may prevent deep breathing which may lead to compression of the lungs [1, 2, 3, 4, 5].

Excessive use of cough suppressants reduces the ability of the individual to cough out foreign objects that have lodged in the lungs, this causes an accumulation of mucus and lead to a blockage of the airway [1, 2, 3, 4, 5].

Other possible causes of bibasilar atelectasis include obesity, pneumonia, pleural effusion or presence of fluid in the pleura, and scarring of the lung from a previous medical condition or injury [1, 2, 3, 4, 5].

The patient may seek a consultation with a physician due to a difficulty in breathing. The physician will identify when the symptoms started appearing and if the symptoms have worsened since it started. A physical examination may be conducted to identify other symptoms that are present [1].

An imaging test such as an X-ray serves as a confirmatory test in the diagnosis of bibasilar atelectasis. It will be able to show any blockage or collapse of the lung that produces the symptoms the patient is manifesting [1].

A pulmonary function test may be requested by the physician to identify the extent of compromised to the lungs. This is also a confirmatory test for this condition [1].

The treatment required for bibasilar atelectasis depend on the causative factor. Mild cases of this condition usually resolve on its own. Cases that are caused by a foreign object or tumor may require a surgical procedure to remove the blockage. Post-surgery patients are advised to perform breathing techniques after the procedure.

This will help the possibly collapsed lung to expand and return to normal. Accumulation of mucus will be managed by positioning the patient wherein the head is lower than the chest to allow the drainage of mucus. More severe forms of atelectasis are managed by removing the portion of the lung that is affected [1, 2, 3, 4, 5].