Genitofemoral nerve is a branch of the lumbar plexus. it is formed from branches of L1 and L2 spinal nerves. The nerve forms in the substance of the psoas major muscle.

The nerve passes down in the substance of psoas major muscle and emerges on its anterior surface, deep in the fascia. Afterwards it descends in the retroperitoneum. On the left side, it passes the left ureter, gonadal vessels, left colic artery and inferior mesenteric vein. On the right side the nerve passes deep to the right ureter, gonadal vessels and the ileocolic artery and vein. On both sides the nerve perforate the psoas fascia and divide in to genital and femoral branches [1]. 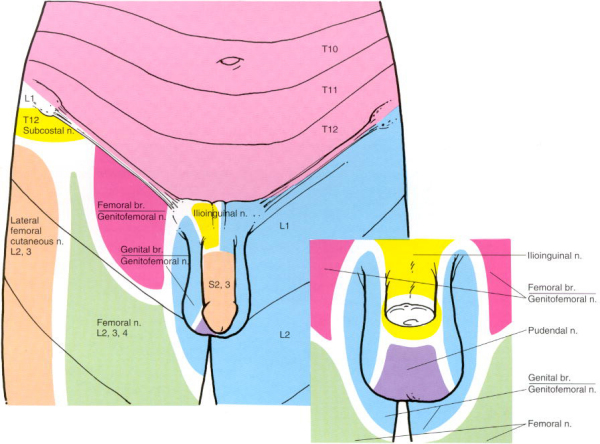 The femoral branch for both genders have sensory perception function [2].

Genitofemoral neuralgia is one of the most common causes of pain in the lower abdomen and pelvis. There are many possible causes for nerve pain:

The pain can be acute- lasting for less than 3 months or chronic, lasting 3 to 6 months or more. The most common symptoms are:

Physical findings in this condition mostly consist of sensory deficit in the inner thigh, and base of the scrotum (for men) or labia majora (women). Sometimes weakness of the anterior abdominal wall musculature can be found. The patient might assume a bent-over position. Tinnel’s sign is often positive- when gently tapping over the nerve, the patient will feel pain, tingling or “pins and needles” sensation.

Imaging studies can be performed to find a possible cause for nerve pain. CT and MRI imaging can show nerve entrapment in the spine, as well as scar tissue in inguinal canal [3]. 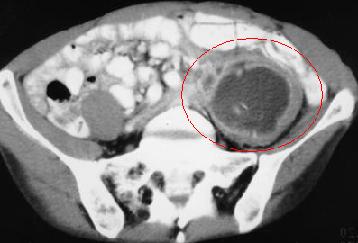 The approach in treating genitofemoral neuralgia, is to initially try out non-invasive methods, before using invasive ones. Medications that can be used to treat pain are:

Other methods can also be used:

In case medications do not treat the pain properly, the next step is to perform genitofemoral nerve block. It can ensure dramatic pain relief. In case the femoral nerve block does not work, epidural steroid injection of the L1-L2 segments can be performed. Also, a promising treatment option is pulse radiofrequency ablation [5].

The underlying cause of genitofemoral neuralgia should be found before starting any treatment. in case the cause of the pain is due to spinal deformation or tumor, surgery is indicated.

If you found this article helpful, share it on social media. For your comments and personal experience use the comments section below.